Corsica, that captivating, mountainous island in the Mediterranean, conceals many mysteries. It has a fascinating culture and a turbulent history. Here are some facts about the island that you might not know.

Corsica has not always been French

Many people think Corsica is part of Italy. This is not surprising, since it’s closer to the Italian mainland and Sardinia than it is to France. But it is actually part of France.

Because of its strategic position, Corsica has always been prized by invaders seeking to dominate the Mediterranean. The island was first a Roman colony, and then under the control of successive Italian city states, including Pisa and Genoa.

Following several Corsican uprisings and the establishment of an independent Corsican Republic in 1755, Genoa finally ceded the island to France in 1768. Genoa had called in French troops to help quell the island but ran up a huge debt as a result. Corsica was ceded to France against repayment of the debt within 10 years, but Genoa had no realistic expectations of paying it back. French troops defeated the Corsicans at the Battle of Ponte Novu in 1769, and the Corsican republic crumbled.

Corsica had a King

One of the more bizarre characters in Corsican history was a German adventurer, Theodor von Neuhof. Following a rebellion against Genoa in 1729, the Corsicans set up their own provisional government.

In March 1736, von Neuhof turned up, bringing weapons and promises of support from Britain. He accepted the title of king and bestowed various honours. However, he soon ran out of money and the Corsicans ran out of patience. He fled in November 1736 after a reign of only eight months. He eventually died in a debtors’ prison in London.

By a strange coincidence, I met one of his descendants at our local literary festival.

Paquale Paoli, who headed the Corsican Republic, had to flee in 1769 after the French victory at Ponte Novo. He went to London, but returned to Corsica in 1790, following the French Revolution.  There followed various power struggles between Corsican notables and Paoli appealed to Britain for protection against a possible further French invasion.

Statue of Pasquale Paoli in Corte, his heartland 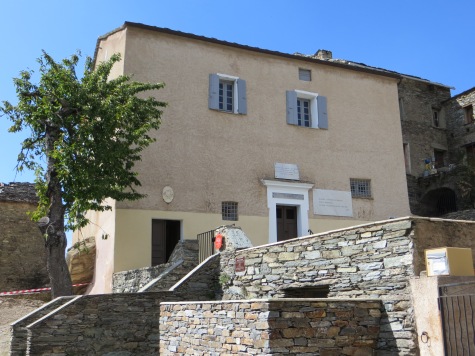 Pasquale Paoli’s house in Morosaglia, now a museum dedicated to him

King George III appointed a Viceroy, Sir Gilbert Elliot, much to Paoli’s disgust, since he had hoped for the position himself. Embroiled in war and focusing on other colonial territories, Britain had few resources to invest in Corsica and withdrew from the island in 1796. Napoleon (himself Corsican) reconquered Corsica. Paoli had to flee again, and returned to London, where he lived for the rest of his life.

Paoli appears in The Corsican Widow, my second Tales of Corsica novel, which was released on 10th May 2018.

The precursor of Coca-Cola was invented by a Corsican

A Corsican chemist, Angelo Mariani, invented a tonic drink made of coca leaves and wine, in 1863. The tonic was known as Vin Mariani. It was a huge success and led Mariani to introduce it to the U.S. as “French wine Cola”. Mariani even received a medal of appreciation from Pope Leo XIII. The Coca-Cola we know today in its non-alcoholic form was first made in 1885.

The founder of the Coty perfume empire, which is now a $9 billion business, was Corsican. Coty was born Joseph Marie François Spoturno in Ajaccio in 1874 and was a descendant of an aunt of Napoleon. The name Coty was a variation on his mother’s maiden name, Coti. He moved to Paris and learned about perfumery. Some of his later scents were inspired by the Corsican maquis, the aromatic scrubland that covers much of the island.

Join my Reader’s Club and receive a free copy of two Corsican stories.

2 thoughts on “5 Facts You Might not Know About Corsica”