I’m delighted to welcome historical novelist, Margaret Skea, to the blog today. She tells us how she started writing historical fiction – and suggests that it can be a good idea to challenge the rules and write about what you don’t know. You’ll also find a riveting extract from her latest novel, Katharina: Deliverance, about the wife of the Reformation-instigator, Martin Luther.

Thank you, Vanessa, for inviting me onto your blog to answer two questions – why I write HF and why I’ve chosen the 16th century.

For any who knew my writing prior to my first novel, historical fiction seemed an odd choice. I cut my writing ‘teeth’ on short stories, and by short I mean UK-style short – around 2,000 words – with reasonable success. I won or was placed in some competitions including Neil Gunn, Winchester, Rubery, Fish, Mslexia and Tom Howard and had some published, so was very comfortable in that genre. I guess you could say that 2,000–3,000 words was my ‘comfort zone.’ I had always nursed an ambition to write a novel, but I’d never tried because I thought there was no way I could write 100,000 words.

Cue first ‘lightbulb’ moment. I don’t remember now who was responsible (if I did, I would thank them!) but someone, when they heard me saying I couldn’t possibly sustain a novel length story, commented, ‘Why not? A novel is only 30 short stories, without the trouble of thinking of a NEW PLOT, a new SETTING and new CHARACTERS.’

I might still have wavered, except that their comment coincided with a change in my personal circumstances that gave me both significant time and space in which to write, thus taking away my last possible excuse for not trying. 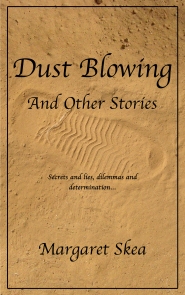 All of my stories up to that point had been contemporary, although I broke the cardinal rule of writing ‘what you know’ by setting many of them in far-flung places that neither I, nor likely my readers, had ever been. My first collection – Dust Blowing and other Stories – includes some of these.

Cue second ‘lightbulb’ moment.  There I was, having decided to write ‘the’ novel, but with no idea of what to write, when up popped a long-buried memory of a footnote reference in some family papers I’d researched years earlier, to a massacre that had taken place in Ayrshire in 1586. It involved a family who were key to the Plantation of Down (Ulster) in the early years of the 17th century, and so, by extension, related to my own history. Rather grisly topic you might think, but I’d grown up in Ulster during the worst of the ‘Troubles’, so I was intensely interested in the impact that living within conflict has on families, on relationships, and on personal integrity.

Cue third ‘lightbulb’ moment. I didn’t feel able to write about the ‘Troubles’. They were too close and personal, but in many ways 16th century Scotland mirrored late 20th century Ulster, in terms of the localized violence, the tribalism, the problems of diverse loyalties, and the background atmosphere of fear. So in a sense I could write what I ‘knew’ in emotional terms, though at 500 years distance. 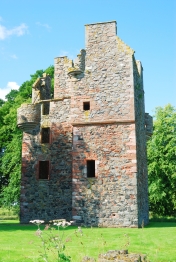 The end result is the Munro series – following the fortunes of a fictional family trapped in an historic 150-year-old feud. Two books Turn of the Tide – I received some rather nice media coverage for that, including on a TV show – and A House Divided are already published and I have a contract for the third, and must deliver it to the publisher in February 2018. This tower, near where I live, is a typical 16th century tower, on which I modeled the Munro home.

As a result I took some time out, to step back eighty years and half a continent away to 1505 Germany, in search of his fascinating, but enigmatic wife, Katharina von Bora.

The first of two novels based on her life, Katharina: Deliverance, has just been released.

‘It is very shameful that children, especially defenceless young girls, are pushed into the nunneries. Shame on the unmerciful parents who treat their own so cruelly.’ Martin Luther

Curled into the window seat, I press my face against the rippled glass, watching the trees bending and straightening before the wind, as the townsfolk do when Duke George passes through the market square. Above the trees, clouds pile, black on black, and I shiver. ‘The rain is coming.’

Klement, standing behind me, whispers in my ear, ‘The giant is coming. His footsteps shake the track leading from the woods. Soon he will reach us and…’ He grips my shoulders, shaking me.

Hans leaps up from his chair, shoves Klement backwards. ‘Stop it!’ And to me, ‘It’s only thunder, Kat, and cannot touch us here.’

Another rumble, louder than the last, and with it a distant rattle, like a cart on the cobbles in Lippendorf. The sky darkens, sucking out the light, Klement hissing, ‘And darkness was over the earth from the sixth until the ninth hour…’

Hans glares at Klement again as a jagged line of light splits open the sky, the accompanying crack frightening. I cross myself and shut my eyes until the noise fades, then peep between my fingers and see the rain spiking onto the ground below the window, churning the semicircle of path that curves to our door into a river of mud. The tree outside the window is blackened and a curl of smoke struggles upwards against the falling rain.

Klement is triumphant. ‘See? Next time it will be…’

‘Shut up!’ Hans spins round, claps his hand over Klement’s mouth. ‘Listen. There’s a carriage coming. Can it be Father?’ His voice has a catch in it that sends another shiver through me. ‘Anna said…’

Klement is at my other side, mischief forgotten. ‘Anna is a gossip. We shouldn’t pay too much attention to what she says.’

He pats my hand, shakes his head. ‘Nothing. Klement is right. It is but gossip and likely nonsense.’

We all crane to see as the carriage rolls to a stop, sending a wave of water arcing towards Anna, drenching her skirts as she waits in the open doorway. There is another flash of lightning as our father emerges and, holding the carriage door, reaches up to hand down a woman dressed in a burgundy cloak, her face shadowed by the broad brim of her hat. The padded velvet top is studded with pearls in the shape of a swan, its wings raised as if poised for flight.

She hesitates on the carriage step, as if reluctant to soil her shoes in the mud, then, with a flash of ankle, she lifts her skirt and, holding onto our father, leaps the puddle between the carriage and the threshold of the door, slipping as she lands. He keeps his arm around her waist even when she’s steady again.

I catch a glimpse of a silver buckle and shining leather, just like our mother’s shoes she wore on Sundays going to Mass, and my stomach aches. ‘Who’s she?’ I ask. ‘And why’s she with Father?’

‘Hans?’ I jiggle his arm, but he stares at the floor, shrugs.

Anna appears, her voice husky as she sends the boys downstairs. She shakes her head at me when I go to follow. ‘Not you, miss. I’m going to tidy you up first.’ She fusses at my dress, running her hands down the skirt, straightening the girdle, tugging at the sleeves. Her grip on my hair is firm, the comb strokes rapid, the teeth biting into my scalp, but when I put up my hand to stop her she slaps it away.

‘Ouch,’ I say, hurt as much by her uncharacteristic brusqueness as by the action itself.

She sets the comb down and turns me to face her. ‘Be good, Kat. Try to behave like a little girl, not a hoyden.’

‘For Frau Seidewitz. She’s…’ She takes a deep breath, the huskiness back. ‘She’s to be your new mother.’

Margaret Skea grew up in Ulster during the ‘Troubles’, but now lives in Scotland. An award-winning novelist – Beryl Bainbridge Award for Best 1st Time Novelist 2014/Longlist Historical Novel Society New Novel Award 2016, and short story writer – credits include Neil Gunn, Mslexia, Fish and Rubery; she is passionate about authentic historical fiction of the ‘you are there’ variety.

History People guest posts
How Much History Should be in Your Fiction?

2 replies on “History People: Margaret Skea, writing about what you don’t know”

Thank you, Vanessa – this is beautifully laid out – about to go off to share (was away all day – sorry!)

Glad you like it, Margaret. A pleasure to welcome you to the blog today.